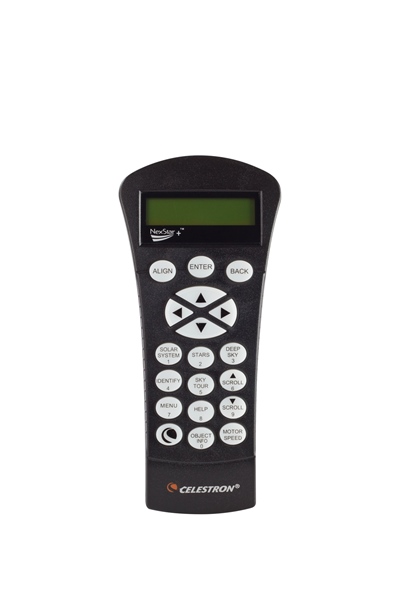 With the push of a button, you can access NexStar+’s huge database of over 40,000 celestial objects.   Automatically slew to objects in a variety of catalogs, including the Messier, NGC, Caldwell, and SAO brightest stars.  The planets as well as a list of the most popular objects are also included.  Not sure what to look at?  Use the Tour Mode, and you’ll be shown a selection of the most popular objects for the time and date you are observing!

A variety of alignment procedures are pre-programmed into the NexStar Plus Hand Controller, including SkyAlign, Auto 2-Star, 1-Star, 2-Star, and Solar System.  You can also choose from a variety of tracking rates (sidereal, solar & lunar) and slew speeds.  Slew at 1, 2, or 3 degrees per second, or choose speeds as low as 2x or as high as 64x.

This hand control includes Flash Upgradeable Technology, allowing users to upgrade its software via the Internet.  Latest upgrades can be found on the Support Tab.